Robert Anderson Irion, physician, surveyor, and Republic of Texas secretary of state, was born in Paris, Henry County, Tennessee, on July 7, 1804, to John Poindexter and Maacha (White) Irion. He received his medical training and completed his education at Transylvania University in Lexington, Kentucky, in March 1826. He began his medical practice in Vicksburg, Mississippi. In 1832, following the death of his first wife, Ann A. Vick, he left a daughter in the care of relatives and moved to Texas, first practicing medicine in San Augustine. He subsequently moved to Nacogdoches, where he became a surveyor and partner of George Aldrich. In May 1835 Samuel M. Williams, Francis W. Johnson, and Robert Peebles sponsored a bill in the legislature of Coahuila and Texas to award Irion and Aldrich 400 leagues of land for enlisting a company of soldiers for the Mexican army. Though the bill passed, Irion never received this grant, but he did receive a ten-league grant for enlisting as a soldier for that year. His title and all of the Mexican ten-league grants were canceled by the Republic of Texas.

When the Mexican land offices closed in the fall of 1835, Irion returned to the practice of medicine in Nacogdoches. On September 14, 1835, he was elected to the Committee of Safety and Vigilance for Nacogdoches and on April 14, 1836, was a commandant of Nacogdoches Municipality. He was a senator from Nacogdoches in the First Congress of the Republic of Texas, from October 4, 1836, to June 13, 1837. President Sam Houston appointed him secretary of state of the Republic of Texas in 1837, and he traveled to the United States, Canada, England, and Europe until President Mirabeau B. Lamar appointed Barnard E. Bee to succeed him on December 13, 1838.

Irion was a charter member of the Philosophical Society of Texas and an Episcopalian. On March 29 or 30, 1840, he married Anna W. Raguet (see IRION, ANNA W. R.) of Nacogdoches, daughter of Henry Raguet; they had five children. Irion continued the practice of medicine in Nacogdoches until his death, on March 2, 1861.

He was buried in Oak Grove Cemetery in Nacogdoches, where a monument was erected in his honor. Irion County in West Texas was named for him in 1889. 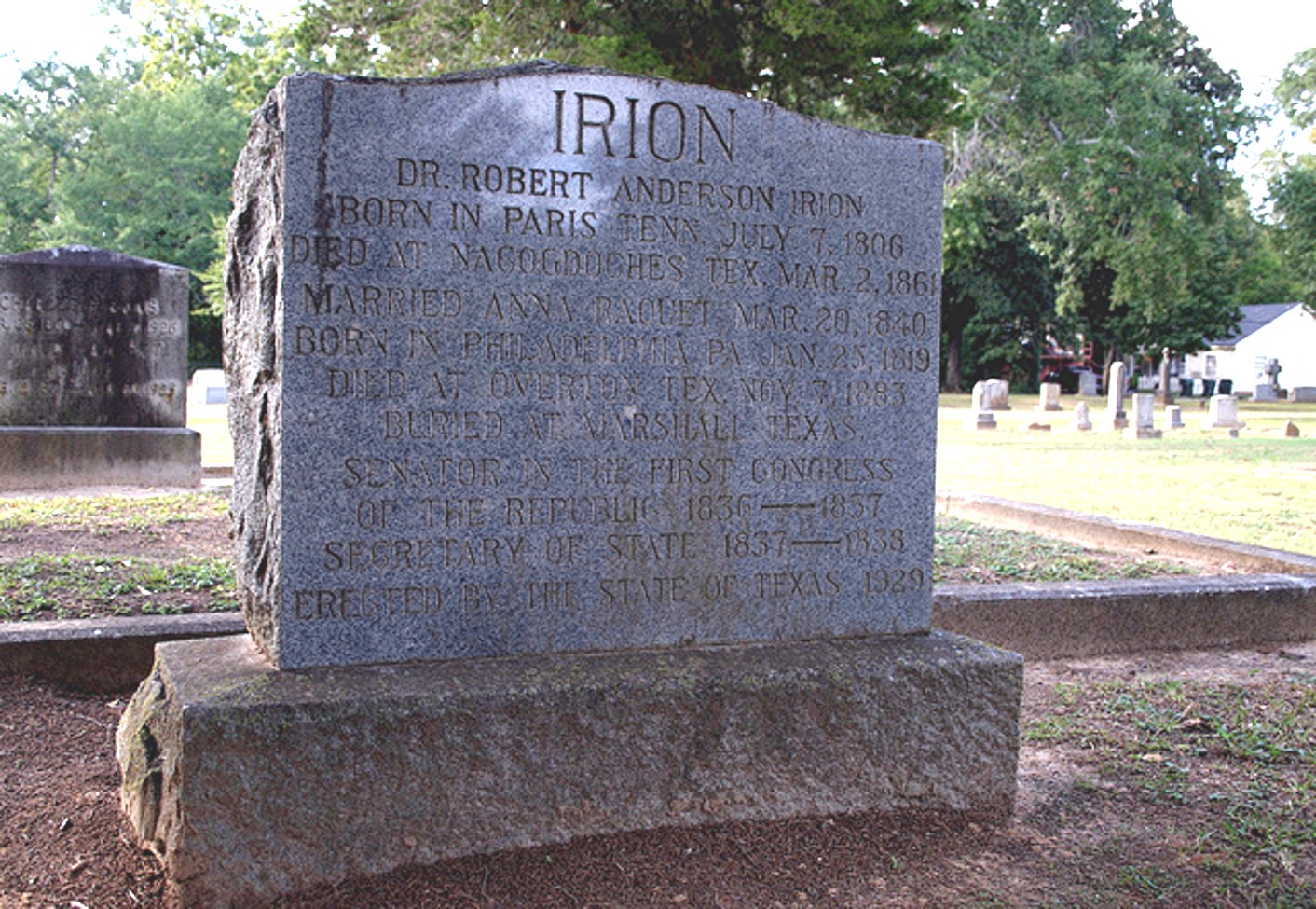 Erected by The State of Texas 1929